The word ‘Ayurveda’ has been coined from two words. The first being "Ayu" which can be translated as "Life" or age of person and "Veda" as "Science or Knowledge", therefore Ayurveda can be understood as the Science of Life. Ayurveda is a comprehensive branch of knowledge which has eight components to ensure that person not only gets rid of sickness but stays healthy in the future as well. These eight components are:-

The Fundamental concepts of Ayurveda

The Concepts of ‘vata’, ‘pita’ and ‘kapha’ are the basics of Ayurveda and a correct and in-depth knowledge of these concepts leads one to understand the workings of Ayurveda. These concepts are also called ‘Doshas’ and an imbalance in these doshas causes an ailment in a person which can then be healed through the right application of dosha correcting techniques.

According to Ayurveda each person is composed of these three doshas. The proportion of the doshas, however, may vary from person to person. Due to stress, dietary patterns, a sedentary lifestyle or any other reason there can be a disturbance in the proportion of these doshas in the body which can cause afflictions in the body and brain. The word ‘doshas’ are often synonymously used with the ‘prakriti’. These doshas are based on the Hindu concept of five elements – wind, space, fire, earth and water. 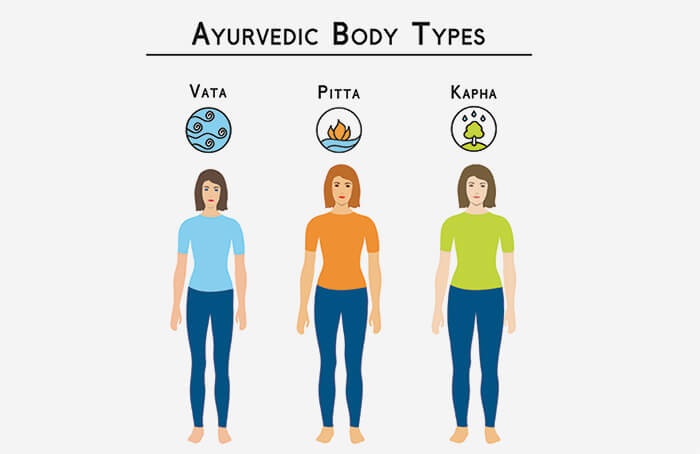 Vata covers the dimensions of wind and space. The vitality of nature which is the force running the blood in our veins, or breathe in our body is emphasized by the Vata Prakriti. This prakriti empowers both the physical and mental aspects of a person including breathing, pulse movement, muscles development etc.

This prakirti oversees the component of fire in the body. This component is related to the power in the body or the proverbial ‘fire in a person. It also affects to a very large extent the body temperature and aspects related to it. The digestion of food in the body is handled by Pitta prakriti whilst also handling the defecation of waste substances part. The quality of the skin and many of the physical features are taken care of by Pitta Prakriti. When it comes to internal organs, Pitta prakriti handles the liver, eyes et al. It also has a great impact on the mind and the cravings of a person.

Kapha Dosha contains a mix of earth and water elements of the body. This dosha is the most predominant part of the three doshas. Since it is the most predominant Prakriti, it additionally plays a balancing role in Vata and Pitta Prakriti. It plays a very important role in the structure of the body and likewise decides the nature of the physical movements. The development of the tissues in the body and its richness is also affected by this Prakriti.

Ayurveda Courses and Retreats in Rishikesh We at Haritha offer a unique experience of a wellness retreats, It is a awesome chance to reach a state of mindfulness by unifying with the universe through the means of Yoga and Ayurveda.

Need Help? Chat with us
Start a Conversation
Hi! Click one of our member below to chat on Whatsapp
The team typically replies in a few minutes.
DHRUV
Online