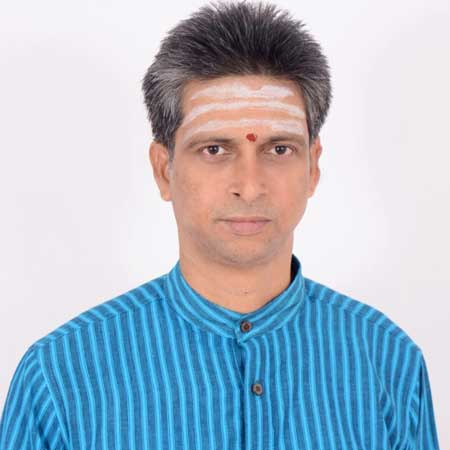 Arya Murty is belongs to a South Indian Brahmin family from Andhra Pradesh and started his yogic practices at the age of 15. By the age of 18, he was initiated into Mantra Yoga and his practices included the mantras of Ganesh, Shiva, and Shakti.

These practices kindled in him a strong desire to pursue the spiritual path with total commitment, so he left his position as a mathematics teacher and traveled to Rishikesh. There, at the Sivananda Ashram, he improved and deepened his yogic practices under the guidance of a residential brahmachari; he also studied under several senior students at the Bihar School of Yoga whom are well-known exponents of Hatha Yoga.

He lived in the Swami Dayananda Ashram as a residential student of Vendanta for three years. Under the guidance of Acharya Sakshatkritananda ji, he studied the Bhagavad Gita and some of the Upanishads.

After completing his studies in the ashram, he became a wandering spiritual seeker. For five years, he traveled—living in semi-forested areas to be closer to nature and intensify his spiritual practices. He spent two years in the small village of Kollur and also had occasion to live a small hill in a thatched hut without electricity or any other modern amenities for six months at a time. He feels very blessed to have had the opportunity to learn from various authentic masters and practice the disciplines that they have taught.

In his experience, he found the practice of adhering to a vow of silence for several days at a stretch to be very helpful in mastering one’s own mind. He finds it joyous and meaningful to lead a self-disciplined yogic life with regulated sleep and food habits beginning the day by waking at the Yoga-stipulated time of approximately two hours prior to sunrise.

After several years in relative seclusion, he began teaching at various yoga schools in 2008. He finds joy in sharing the knowledge he’s cultivated from various traditional Indian Yoga teachers. To date, he has taught mostly international students the yoga philosophy. The 100 Hours yoga teacher training certification course in Rishikesh at Haritha Yogshala is the best for beginners or short term learner. 300 Hour YTTC is Advance Yoga Training is for yoga teachers who has completed a 200 Hour YTTC and looking to deepen their knowledge.

Upcoming 200 hours yoga teacher training course in Rishikesh starts from 07-Aug-2020 @ 1350 USD 899 USD Know More | Book Now >>
Need Help? Chat with us
Start a Conversation
Hi! Click one of our member below to chat on Whatsapp
The team typically replies in a few minutes.
DHRUV
Online